My great grandfather, Augustus Roland Temme (1840-1912) came from Prussia in 1845. On April 20, 1861, at the age of 20, he enlisted in the Friend Rifle Guards, the First Excelsior Regiment with Daniel Sickle’s Excelsior Brigade. The First Excelsior became the 70th New York Volunteers Infantry; he was in Company E.

In 1864, he was transferred to Company F, 86th New York Volunteers Infantry. Augustus was with the Army of the Potomac throughout the war, from the Peninsula Campaign through Appomattox. After the war, he returned to Allegheny, Pennsylvania and married Mathilda “Pauline” Eleanora Adolphine DuBroc in 1866. Their sons were named for Augustus’ Civil War commanders Joseph Hooker and William Dwight (a colonel over the 70th through the battle of Yorktown).

I wrote a book based on the list Augustus wrote of the battles he was in, Augustus Temme in the Civil War. The book details where his regiment was in each of the battles, focusing on what his experience would have been based on primary sources like diaries, letters, commanders’ reports, etc. 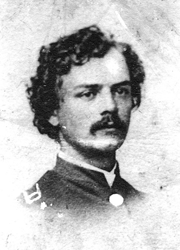