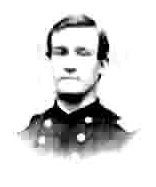 Mustered out Dec. 28, 1863 after a prisoner exchange to accept a commission as an officer in a colored infantry regiment.

Frederick E. Miller was born in New York state, son of F. T. and Mary Ann Miller. He was the oldest of seven children, 18 years old in 1861 and working as a clerk in the Goodhue County, Minnesota office. Mustered into the First Minn. Infantry with other volunteers from Red Wing that became the nucleus of Company F.

William Colvill, Captain Co. F, mentioned Miller during the action of their first battle at Bull Run. Lt. Col. Stephen Miller reluctantly gave the command to retire after his two companies, separated from Gorman, were alone on the field, suffering from the heat and thirst. “Some remained on the field,” Colvill said. “The last, perched on a fence, and there himself a good mark, stayed till I insisted on his leaving. This poor fellow, Fred Miller, of my company, had advanced furthest to the front of any man that day, and was at one time cut off from us by the enemy. On leaving the field he come across three of his comrades carrying a fourth to the hospital, and helping, was captured.”

The captured Minnesotans were sent to Libby Prison in Richmond. From there Miller was sent to a prison in Tuskaloosa, Alabama. One of his letters home from there has a censors examined mark “ex/hw”, which speculation has suggested might be the infamous Henry Wirth. He was also is Salisbury Prison briefly.

Miller was eventually exchanged and returned to Union lines. Served as Post Adj. at Ft. Snelling the summer of 1862. Corporal Miller was discharged Dec. 29, 1863 and Captain Miller was re-mustered in on the same date at Benton Barracks Mo. to the 62nd US Colored Inf. He received a Brevet Major rank for gallant actions in service dated May 13, 1863. He served at Port Hudson, Baton Rouge, LA with a heavy artillery company and at the works at Morganza, LA until the move to Brazos de Santiago, TX. Cmnd. Federal Advance in the operations of May 12 & 13,1865 at Palmeto Ranch, TX – the last Federal Battle under the enemies fire in the War of the Rebellion.

In January 19, 1866 he was discharged at Ft. McIntosh, TX arriving at place of enlist-ment March, 1866 after 4 years, 10½ months of service. After the War he attended Michigan State Ag. College and upon graduation accepted a position as Superintendent of the Farms and Professor of Agriculture at Kansas State University. While there he courted and married the daughter of the University President. My father was a result of that union.