MN in the Civil War

Minnesota’s Role in the Civil War

Minnesota was a new state during the Civil War and a Mecca for immigrants. As many as 1,000 steamboats a year dropped newcomers at the St. Paul landings. Most were farmers and wheat was their dominant crop. A population of 172,000 in 1860 grew to 250,000 by the end of the war – even though the western half of the state was largely depopulated during the 1862 Dakota Conflict. Reaction to that event, still the most important in the state’s history, radically changed the state and the wartime experiences of its soldiers.

When Fort Sumter was fired upon in April 1861, Governor Alexander Ramsey happened to be in Washington and offered an as yet non-existent regiment to defend the Union. The offer became the first one from a state to be accepted and Minnesotans rushed to join the new state’s first volunteer regiment. Ramsey later stated that over 50% of young Minnesotans eligible for military service had gone off to war. Statistically around 14% of the 1860 population, some 24,000 men and a few women, served in the eleven regiments and one battalion of Infantry, two companies of sharpshooters, three batteries of light artillery, one regiment of heavy artillery, and two battalions and two regiments of cavalry offered by the state. Most were volunteers though fewer than 2,000 were drafted late in the war. Other Minnesotans joined in the Navy and 102 African American residents served in the United States Colored Troops.

Most Minnesota volunteers, recruits and the few draftees entered military life at Fort Snelling. The venerable stone fortress built in the 1820s was in sad shape when war began, but huge improvements and expansion was funded by the federal government. Frontier businessman Franklin Steele, who had purchased the military reservation in 1858, oversaw much of the work on “his” fort. New soldiers typically spent a few weeks at the fort learning drill and their place in the military pecking order before being sent east or south via Mississippi River steamboats, or to less exciting garrison duty at the frontier Forts Ripley, Ridgely and Abercrombie located adjacent to Indian reservations. All eventually returned home through a much changed Fort Snelling.

In August 1862 Minnesota’s Civil War opened on a second front when elements of the state’s 6,000 or so Dakota went to war, aggrieved over treaty provisions and unwilling to make transition to sedentary farming life on the reservations. Dakota warriors killed over 600 men, women and children, attacked Minnesota troops, and threw the state into a panic. Volunteer forces under now Colonel Henry Hastings Sibley eventually defeated the warriors at the Battle of Wood Lake. After freeing white and mixed ancestry prisoners, they gathered up over 1,700 mostly innocent Dakota and moved them to Fort Snelling where they were housed and fed in a huge internment camp.

Meanwhile the federal government created a military Department of the Northwest, Major General John Pope in command, and made plans for expeditions west to punish those hostile Dakota who had fled. With thousands of farms abandoned it was essential to secure a buffer zone to repopulate the western half of the state. The federal government meanwhile had abrogated the treaties and in May 1863 deported most of the Dakota and Winnebago to Missouri River reservations.

For the next three years many Minnesota soldiers faced arduous campaigns on the plains or garrisoned tiny outposts spaced 20 miles apart down the middle of the state. The 1863 Sibley Expedition or the 1864 Northwestern Indian Expedition was the first combat and active campaigning for thousands of Minnesotans. The pivotal battle of Killdeer Mountain in 1864 finally ended most treats of hostile incursion into southern Minnesota farmland, and probably involved the largest number of Minnesota soldiers in any one Civil War battle. Fort Snelling and the frontier posts assume new importance as staging areas for expeditions, marshalling yards for animals and supplies, and for coordinating defense within state borders. African-American teamsters and their families, most formerly enslaved, came to Minnesota to support those expeditions. Galvanized Yankees – captured Confederates who swore an oath of allegiance to the US – were deployed west through Minnesota to garrison newly created Dakota Territory forts. The State of Minnesota was militarized to a degree beyond that of most other northern states.

When the Civil War ended in spring 1865, Minnesota soldiers were scattered across the South and to the northern Great Plains. And while most volunteer units were quickly disbanded, companies of Minnesota cavalry continued to serve until the summer of 1866. The economic stimulus of federal money funneled through the Department of the Northwest to support the protection of Minnesota coupled with newly opened farmlands stimulated unprecedented growth of the state. Tens of thousands of new Union, and some Confederate veterans saw their future in the North Star State. Having furnished the first volunteer soldiers offered to defend to Union, Minnesota also was the home of Albert Woolson, the last surviving Civil War veteran. Woolson passed through Fort Snelling as a teenaged musician in the First Minnesota Heavy Artillery in 1864 and died in Duluth in 1956. 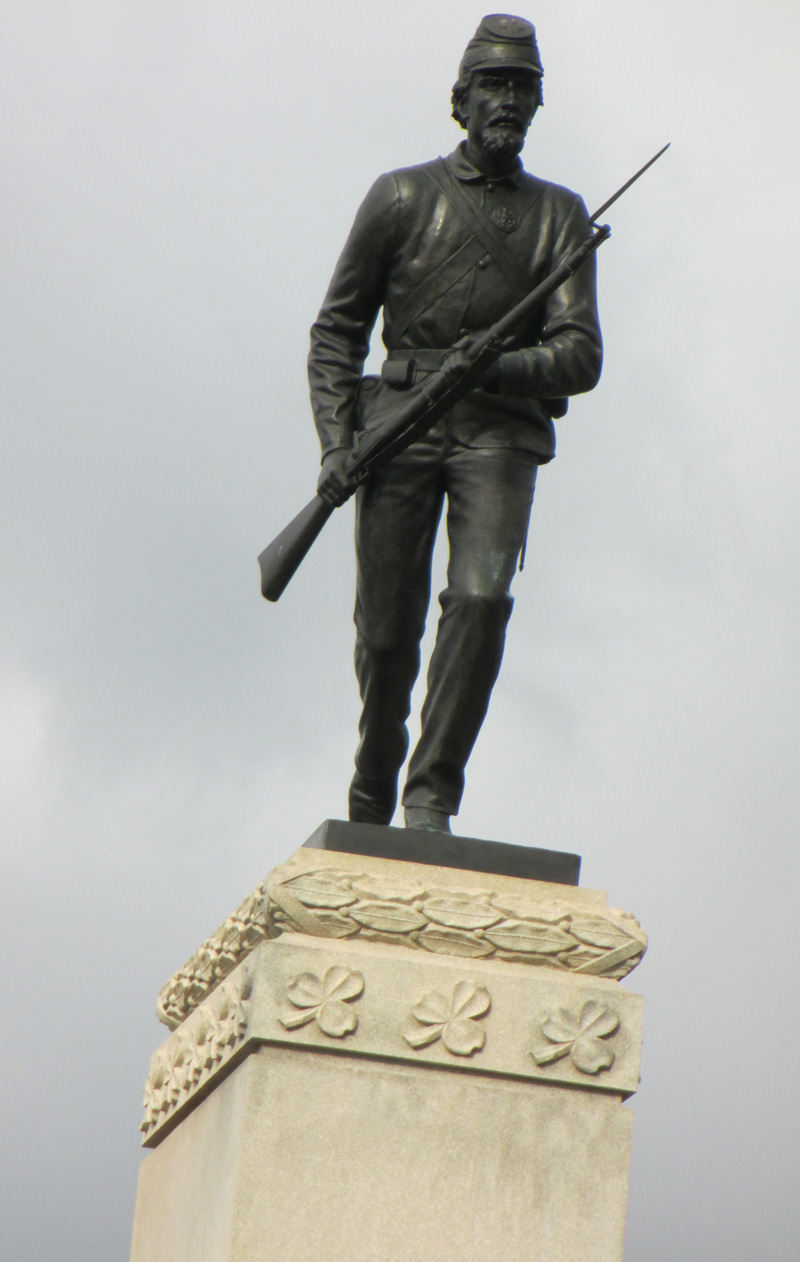 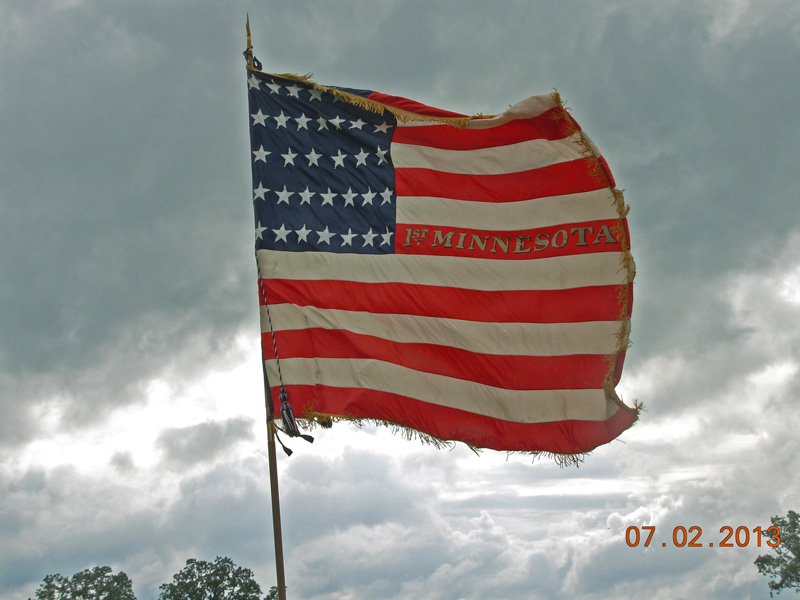 First Regiment Minnesota Volunteer Infantry
Served April 1861 to April 1864 and was the senior volunteer regiment in the US service. Suffered more casualties at First Bull Run than any other federal unit. Participated in the Peninsular Campaign, Antietam, Fredericksburg, Gettysburg and Bristow Station Battles.

First Battalion Minnesota Infantry
Organized in May 1864 from First Minnesota veterans and recruits and served to July 1865. Participated in the Siege and Battles of Petersburg and the Appomattox Campaign. The regiment and the battalion lost during service 10 officers and 177 enlisted men killed and mortally wounded and 2 officers and 97 enlisted men by disease.

Brackett’s Battalion Minnesota Veteran Volunteer Cavalry
Served September 1861 to June 1866. Three companies with the Fifth Iowa Cavalry through February 1864 then with companies added became a battalion. Participated in outpost, patrol and skirmish duty in Kentucky and Tennessee, then 1864 Northwestern Indian Expedition and Battles, and 1865 Indian campaigns. Battalion lost during service 4 enlisted men killed and 1 officer and 6 enlisted men by disease.

Additional Minnesotans served in the United States Navy, the United States Colored Troops, the Veteran Reserve Corps, and the Veteran Volunteers. Several hundred others enlisted for short duration during the Dakota Conflict of 1862 in a score of local militia units, some of which saw action.